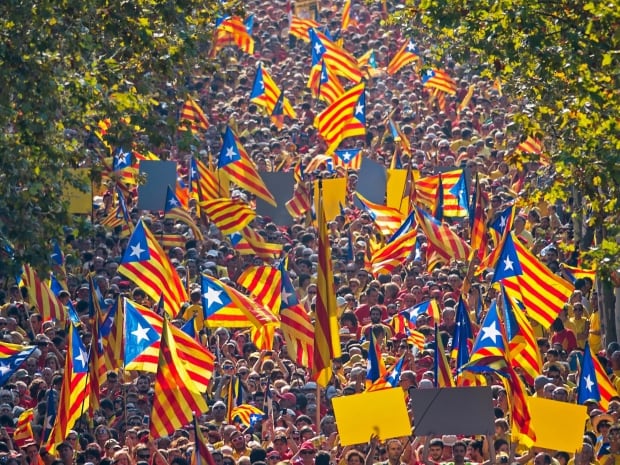 I am writing this from the 11th floor of our Ibis hotel looking down on Barcelona, a city I have been visiting off and on since a teenager.

In many ways it is very much the same place – La Rambla is just as busy and expensive as ever, the totally-brilliant La Sagrada Familia is still under construction while Christopher Columbus, atop his column, continues to point in the wrong direction.

But Barcelona has changed in one very significant way.   In 1964 it was in Spain.

I remember then being fascinated by the grim-faced members of the Civil Guard with their distinctive shiny black tricornio hats and their machine gun held purposefully at their side.

What I didn’t not realise at the time is that they were General Franco’s occupation troops, suppressing the Catalan people along with their language and culture with a degree of ruthlessness you can only find in an authoritarian regime.

So that today, some 41 years after Franco’s death, Barcelona is determinably Catalan, seeking independence from Spain. The Catalan flag flies everywhere.  Most public notices are in three languages: Catalan, Spanish and English.  Sometimes the Spanish is defaced.

There are clear parallels with the Scottish referendum for independence – and even the imminent referendum over staying in the EU.  There seems to be a determination to assert national identity as an important component of who we are.

But who are we?  How do I define my identity as a person? And how important is my nationhood or culture in making me who I am?

And here I think he speaks for an entire generation, seeking to define who they are, in their allegiances and passions.  We look to our culture and traditions to provide a mooring in a fast-changing world.

So as Franco sought to crush Catalan culture he was doing more than simply outlawing a language, he was seeking to mould people’s key identity to maintain political control.  He failed completely.  Hence the powerful desire today for independence against Spanish oppression.

For we all need a solid sense of our personal identity. Christian psychiatrist Glynn Harrison observes:  “A relatively stable sense of self is integral to an individual’s mental health and wellbeing.”

So as I move between different roles and contexts I need to know that I am the one and the same person.  Wherever I am, whatever I may be doing, I am always me.

As it happens what gives us our identity, the sense of who I am, came to the fore just two weeks ago when the Daily Telegraph broke the news regarding Archbishop Justin’s biological father.

Certainly for the people of the Hebrew Bible, you were defined by who your father happened to be.  Hence all those ‘begat’ passages.

Even Jesus himself was defined in terms of his supposed father – Jesus, son of Joseph (eg: John 6:42) and also with reference to his home town – Jesus of Nazareth (eg: Matthew 26:71).

But with his cross and resurrection everything changes.

“So from now on,” rejoices the apostle Paul,  “we regard no one from a human point of view. . .So if anyone is in Christ, there is a new creation: everything old has passed away; see, everything has become new!”  (2 Corinthians 5:17)

So faced with his discomforting news Justin made it very clear on how he sees himself: “I find who I am in Jesus Christ, not in genetics, and my identity in him never changes.”

It is this understanding that gives Archbishop his security as a person, the defining centre.  Of course, we may see ourselves in differing categories, our nationhood, occupation, marital status, talents, football team. But these can only be secondary.

When it comes to personal identity the word ‘Christian’ is always a noun, never an adjective.  So Andrew Leake (“Buenos días, Andrew!”) is an Argentinian Christian and not a Christian Argentinian.

For to be found in Christ is all we need.  As ever he is sufficient. “What marvellous love the Father has extended to us! Just look at it—we’re called children of God! That’s who we really are.”(1 John 3:1).